January nights in the high jungles of Burma are cold.  Not the kind of cold that kills quickly, but the kind that slowly numbs as the blood flees limbs and stiffness seeps  into muscle and joint.  In this season, even sleep turns traitorous. Those who don’t have blankets get up in the middle of the night, build a fire and wait for the morning sun. This raw world of bamboo, river  and jungle shelters no illusions of our physical existence… to be alive is to be vulnerable.

One day in January, our 4th year PA student, Sha Lah Qwah, rose with the sun.  It was his day off and he contemplated his options.  He saw some other students carrying sections of PVC pipes to the river to install another water line for the clinic.  So, he thought he would help do that.  He quickly powered down a Karen  breakfast of champions – “TaGaPaw” (rice porridge + ) and joined his friends.  As he carried his second load to the river, he saw the student clinical coordinator and LLP, one of the senior PA students, hurrying towards him. The clinic telephone had brought news that a young Karen man had been seriously injured and needed immediate help.  The voice on the other end of the line asked, “Can you send someone?”

Sha Lah Qwah was a good choice for the job. He  knew the way quite well.  He was also quite comfortable driving  a motorcycle on the jungle footpaths. Before becoming a PA student, he operated a motorcycle taxi service on the trails of  northern Karen state.  This is not a job for the weak of heart.  Think Pony Express on steroids. The only trouble: as a new 4th year student, Sha Lah Qwah lacked the medical experience to deal with a major trauma.  The Clinical Director was attending to administrative duties outside the area and wouldn’t be back for hours.  LLP is one of our 5th year PA students.  She has taken the EMA trauma course and has learned much by handling  difficult patient cases over the years. She also has the heart of a lion.  If the Clinical Director wasn’t available, she was a good second choice.  Sha Lah Qwah and LLP grabbed the trauma bag, hopped on Sha Lah Qwah’s  well-used 125cc Chinese-made motorcycle and headed out.

As a young man, confident on his steed… riding  into an unknown, potentially dangerous  situation… with adrenaline coursing  through his veins…  well, let’s just say, later LLP would tell one of her friends that during the ride  she was thinking, “I  am going  to die”.  Although she will only admit to being a little bit afraid, she claims Sha Lah Qwah turned the normally 30-minute trip into 15.  Sha Lah Qwah does remember LLP telling him to slow down because she was also pulling on the collar of his shirt  to the point that he couldn’t breathe. They both laugh about it now.

As they drove,  ducking branches, dodging rocks and fording rivers, the two made their plan:

“WHAT SHOULD WE DO?”
“I DON’T HAVE ANY EXPERIENCE IN THIS!”
“FIRST WE’LL TRY TO STOP HIS BLEEDING”
“START AN IV”
“TRY TO EASE  HIS PAIN”

They were both students. Inexperienced. Young. Not at all sure they would have the skills needed. But they pressed on.

When Sha Lah  Qwah saw the injured young man, he thought he looked familiar but couldn’t quite place him.  Later he would remember seeing him in the clinic and treating his small children.  The man’s friends  had already applied a homemade tourniquet around his upper thigh and had managed to  stop the bleeding. They had also started an IV.   The closest surgeon was more than a day away.  There was no getting around it… the two intrepid PA students, as inexperienced and  unconfident  as they were,  were still the best available help around.  They checked his airway, breathing, vital signs – roughly all ok. The patient didn’t seem to be in shock. No other injuries.  They prepared the commercial tourniquet from the trauma kit and set out the special clotting gauze.  Slowly, cautiously they  released the longyi that served as the  homemade  tourniquet. Surprisingly, and with great relief, they found the bleeding had mostly stopped.  The injured man, however, did have a  wound the size of a grapefruit on the back of his right upper thigh. A huge hunk of his proximal hamstring muscle had been blown out.  His distal pulses, sensory and motor functions were all intact.  Somehow the femoral artery, nerve and sciatic nerve had been spared.  Miraculously, his femur had also escaped injury. They cleaned the wound and packed it with gauze. The patient was ready to be transported to the clinic.

The rest of the story was fairly uneventful.  They packed the patient  up in a hammock tied to a long bamboo pole.  Several of his friends carried him to the clinic with our two PA students following on the motorcycle… very, very slowly this time. The clinic cleaned and debrided the wound.  They gave IV antibiotics and dressed the wound daily.  About a week later they transported the patient to a surgeon who said the wound looked great and could be closed immediately.  He closed the  wound and after a few days discharged the patient home.  About two weeks after that, the patient walked three hours back to our clinic to get his sutures out and receive his second tetanus immunization. He barely limped.

As Sha Lah Qwah told me this story, I was reminded again why I love working with the Karen. He isn’t very experienced yet. He knew others would be looking to him for answers.  He also knew that he might not have them.  And a young man’s life would hang in the balance.  What did he do?  He got on the motorcycle and headed into the unknown with what he had.  A Christian man,  Sha Lah Qwah is one of those quiet kind of leaders.  At first, you don’t even realize he is gently guiding you. In years, he is young.  But like some young men who have endured great things, he is also a wise older brother.

Dawn in January in the high jungles of Burma is a very welcome sight as warmth gently seeps back into the world.  Dogs and man alike gather in patches of  sunlight to just sit and soak a while. Sha Lah Qwah is a nickname this student chose for himself.  In the Karen language it means “look… the stars and moon!”   When the night is cold and black… when you are feeling vulnerable, alone in an insecure, uncomfortable place… look up.  Look … the stars and moon.  Remember our Creator!  One who loves us dearly. One who promised to always be with us and knows exactly what it’s like to be vulnerable.  As vulnerable as a babe in a manger.  To be alive is to be vulnerable.  To be Christian is to stand there in faith and thrive.  Sha Lah Qwah!! 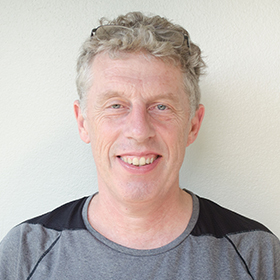 Dr. Mitch has run several medical programs in remote places. He enjoys exploring new worlds with enthusiastic experts in their fields…anything in medicine, science, history, art, music, engineering, philosophy, multimedia and IT. He has recently conceded that he’s not likely going to get to go to the moon in his lifetime. But Antarctica is still on the list. 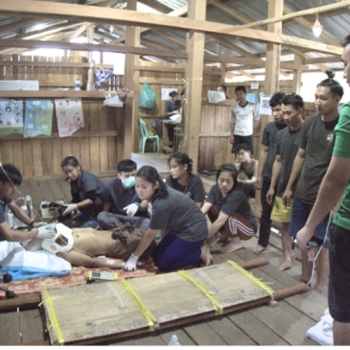 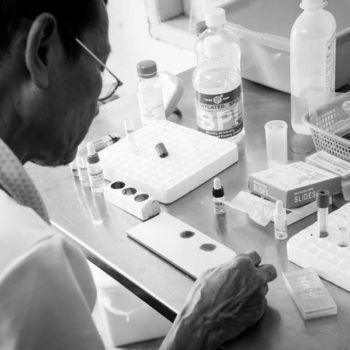