Sai Sai Poe, EMA Year 4 Physician Assistant student, shares a patient story of a lady suffering with gastrointestinal bleeding due to a peptic ulcer.
“Naw Day Mu Wah is a 29 year old mother of six children. The oldest one is 8 years old and the youngest one is 5 months old. The youngest two children are both still breastfeeding.
Naw Day Mu Wah started to vomit around 1:00 am on 27-Aug, about 300 ml. It was the first time, so she thought it would be ok but around 9:00 am she vomited again, and also noticed blood in her stool a few times. She estimated about 2.5 ml total blood in her stool. She noted that she started having tiredness, dizziness, blurred vision, and feeling cold extremities. In the evening around 4:00 pm. She started to get much more drowsy and tired. Her husband was able to give 500 mL of IV fluid and called for help from Htee Haw Hta Clinic (HHHC). Two HHHC health workers went to the village and gave one more bottle of fluid. Her condition was getting worse so the health workers suggested to take her to their clinic which is located one and a half hours away from her village. The villagers carried her with a hammock from the village to HHHC but she passed out on the way. Then, the clinical leader of HHHC called Rain Tree Clinic (RTC) and explained the patient’s condition, said that she needed a blood transfusion and asked to refer her to RTC. When they called us at the Rain Tree Clinic I asked about the blood group of the patient, but she didn’t know, so I told them to come to the clinic and in the mean time to continue the IV fluids and give her 1g of IV ceftriaxone. They gave her more fluids and then left the HHHC to come to Rain Tree Clinic. 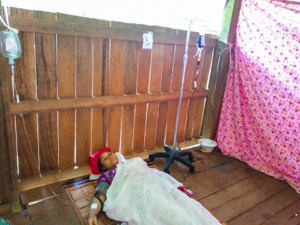 It was raining heavily and they travelled the whole night, leaving at 9 pm and arriving at 10 am the next morning. When she arrived to RTC she was awake and could answer questions. We immediately checked her hemoglobin level and blood grouping. The result showed a very low Hemoglobin of HB= 3.1 g/dL, and a blood grouping of O+, we explained to her husband that she needed a blood transfusion, and asked him first to donate blood and he agreed and so we checked his blood type, but it did not match. We asked him to find other donors, gladly some of his relatives came and out of 5 people, two were O+ and were able to donate. We checked the donors for HIV, Syphilis, HBs, HCV, Malaria and cross matched the blood so there were no problems. After one bag of blood transfusion her hemoglobin level went up a bit and was 4.4g/dL. After the second bag it had gone up even more to 4.9 g/dL, but it was still too low. We needed to give her more blood, but had no more donors until one of our clinic staff, Saw Moo Nay, agreed to donate their own blood to her. This was the third bag of blood. After this third bag, her hemoglobin level was then 6.9 g/dL, which is still medically low. Fortunately, she didn’t vomit or pass any more blood in her stools.
The patient stayed with us for 8 days, her hemoglobin continued to increase, and at discharge it was back up to a safe level. During her stay, we got to know her. She liked betel nut and chili. She had a history of gastric pain and she was also diagnosed with GI bleeding due to peptic ulcer. After 5 days of staying with us, we allowed her to start to eat food by mouth again as there were no more signs of gastrointestinal bleeding. We sent her home with a treatment plan including numerous medications.” – Sai Sai Poe

Sai Sai Poe is a Year 4 Physician Assistant student currently interning at the Rain Tree Clinic. Since Sai Sai Poe was a child, he’s wanted to be a teacher and a doctor so he could both heal people and empower others to take care of themselves.

Rainy Season: The Season of all Dangers 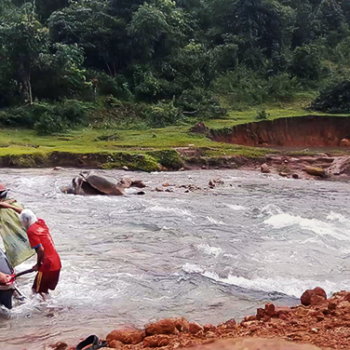 Influence and our Story 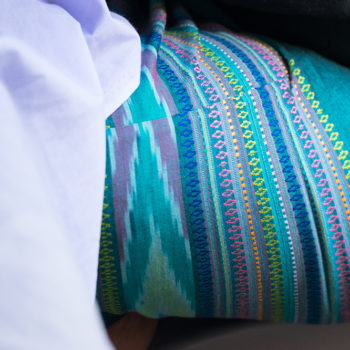